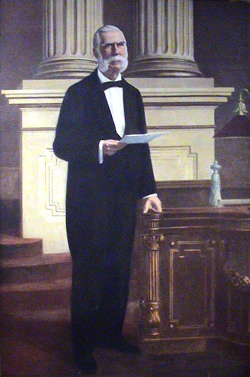 this campus exists today. After serving as Grand Lodge Treasurer for 34 years, Thomas Ranken Patton died in 1907. Upon his death, half of his estate was given to the Grand Lodge to establish a boarding school for orphaned sons of Master Masons. The school closed in 1977, after which it was converted into the Masonic Conference Center-Patton Campus and the headquarters of the Pennsylvania Masonic Youth Foundation that we know it as today. Because of his work in extending Freemasonry’s willingness to serve its youth, Thomas Ranken Patton is most worthy of being honored this December.

For new members the day will commence with a new member orientation at 9:00 am. The Initiatory Degree will begin 10:45 am, followed by a banquet lunch at Noon. Immediately following the luncheon, the DeMolay Degree and then the 4th Section of the Initiatory Degree will be presented. Members of the Degree Teams, new initiates, first line signers and their Advisors are encouraged to spend the weekend from Friday night to Sunday morning. The address for Patton Campus is 1244 Bainbridge Rd, Elizabethtown, PA, 17022.